All about glaucoma (under construction)

Glaucoma is the name given to the eye disease where the pressure inside the eye is high enough to damage the internal eye structures, mainly the retinal nerve fibres and the optic nerve.

This definition begs the question: what is "high enough" intraocular pressure? Well, high pressure for a given individual is that pressure at which damage occurs in that individual and this damage is commonly measured in 2 ways: by looking at the optic disc of the eye (fundoscopy, disc photography etc) and by examining the field of vision of the eye. (automated perimetry).

On your first visit to the eye doctor he may take recourse to a statistical definition of high pressure; i.e to say a pressure that is +2 standard deviations more than the mean pressure of the eye in the "normal population". In other words a pressure of more than 20 mm Hg. However this initial impression must always be confirmed by checking the optic disc and performing a field examination (automated perimetry), to confirm whether this pressure is indeed "high enough" to cause damage. To complicate matters further some individuals may have pressures less than 20 mm Hg (i.e. pressures falling within the statistically normal range) and yet have disc and field damage suggesting glaucoma. These individuals are said to have "low tension glaucoma".

Glaucoma is commonly of three types:

1 Congenital or juvenile glaucoma: where abnormal tissue blocks the angle of the anterior chamber thus not allowing aqueous to freely enter the trabecular meshwork. This glaucoma is present at birth or becomes obvious before the age of 20 yrs.

2. Angle closure glaucoma: where the iris at it's periphery comes into contact with the cornea blocking off access to the angle. Here the pressure rise is sudden, and the pressure rises to a very high level giving the patient severe pain and reduction in vision immediately.

3. Chronic open angle glaucoma: where access to the angle is not impeded but the trabecular meshwork is no longer fully effective in draining aqueous, presumably due to narrowing of the holes in the trabecular meshwork. Here the pressure rise is gradual, damage occurs over a longer time and the patient may not realize he has any problem till visual field damage is very advanced. It is this form of glaucoma that has led glaucoma to be characterized as the "insiduous thief of sight" . The lack of any obvious symptoms in the early stages is what makes it important to visit your eye doctor for routine examination and IOP measurements after the age of 40 even if you have no symptoms.

Intraocular pressure (IOP) also called intraocular tension (IOT) is measured by a procedure called tonometry.Tonometry is done either by 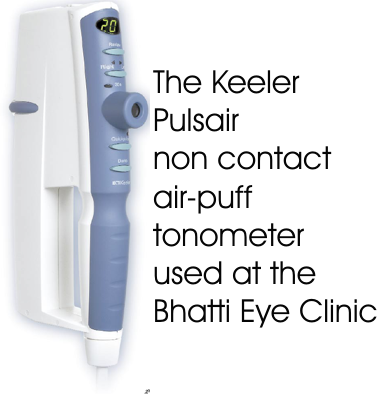 touching an instrument to the eye after numbing it with local anesthetic, or by a non contact method called pneumotonometry. However it has recently been found that there may be errors in all the common methods to check IOP due to variation in the individuals corneal thickness, so it is also recommended that in the initial workup the patient's corneal thickness be measured (a procedure called corneal pachymetry) so that a corrected tonometry reading may be obtained.

Glaucoma is the condition where the intraocular pressure is high enough to damage the eye:

All these investigations are available at the Bhatti eye clinic, Mumbai, India

Congenital glaucoma: the preferred treatment is by surgery. The surgery is called goniotomy and in this the tissue at the angle of the anterior chamber which blocks access of the aqueous to the trabecular meshwwork, is cut, using a special knife called a goniotomy knife using special lenses called gonitomy lenses to view the details of the surgical area.

Angle closure Glaucoma: When the intraocular pressure has risen to a very high level during an acute attack, the immediate management is medical, using an intravenous drip of a drug called mannitol to lower the eye pressure while instilling a drug called pilocarpine in to the eye at frequent intervals, in order to constrict the pupil. Once the pressure has been controlled it is maintained at a low level using pilocarpine drops three times a day and with tablets of a drug called acetazolamide. Soon after, the definitve treatment is carried out and this consists of a surgical procedure called iridectomy (making a hole in the iris) which may also be accompanied by a procedure called trabeculectomy (making a new drainage channel for the aqueous to leave the eye). Though the iridectomy can also be done by using a laser called a YAG laser, in Indian eyes surgery is often the less traumatic option due to the thick pigmented irides in Indians, which make YAG laser difficult. .In caucasian eyes YAG laser is an acceptable alternative.